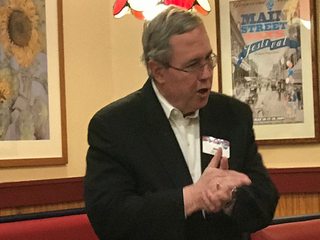 “Timekeepers, please time one minute of silence now.”  This phrase was used by the June Outstanding Member many times during this past contest season. Let’s do the opposite of that now and give a HUGE round of applause for our Outstanding Member, Warren Ehn!

Warren answered the call to serve as Contest Toastmaster for multiple contests, with the most notable being the District contest.  He masterfully worked his way through the contest script each time, making sure to include his own personality and style.  I imagined our contestants being on a talk show as he interviewed each one of them; asking them questions that were both insightful and entertaining.

The District contest was recorded and then played during the watch party at the conference.  Warren made the transition seamless, going from video to live and in-person.  He was the perfect person to make the new hybrid experience work.

On behalf of the Trio, congratulations on earning the Outstanding Member of the Month for June.  Your dedication and preparation set the tone for the contest and was easily admired.  Thank you for supporting the members of District 25!