Linda Williams, Region 3 Advisor, paid us a visit last month. A Region Advisor (RA) oversees several districts’ worth of Toastmasters clubs, providing support and advice to district officers mostly by phone, but also making one visit in person each year.

Since these visits are so rare, it’s important to make the most of the RA’s time. Organizing the schedule was the responsibility of Lt. Governor Marketing Cindy Hinckley. Linda would be here on Friday and Saturday, October 18-19. The District Executive Committee (DEC) Meeting and the Marketing Workshop were already planned for Saturday. So Cindy arranged a varied lineup of meetings with clubs and corporate sponsors to keep us busy all day Friday.

Besides the RA and the LGM, the entourage also included the PRO (that’s me, Jodie Sanders, Public Relations Officer). I was enlisted to drive the car, take pictures, and carry the luggage. Actually, there was no luggage to carry, but driving the car was a useful service that allowed the others to discuss district affairs without distractions. Lt. Governor Education and Training Marylee Mims joined us for the second half of the day.

The first stop was in west Fort Worth at PDX, Inc., the company that sponsors the PDX RxOrators. We met with club President Cindy Feneley and VP Education Mark Yarbro, along with three company executives who sponsor the club. The discussion centered on how the company has and can continue to support Toastmasters in their workplace. 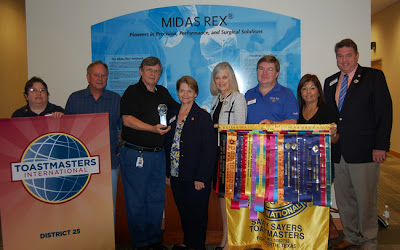 Our next visit was to Medtronic, which sponsors the Savvy Sayers club at their Haltom City facility. One of the important duties of Region Advisors (and other International officers) is to present Corporate Awards, which are generally given to companies that sponsor multiple clubs (whether locally, nationally or internationally) and have a high profile in their community. 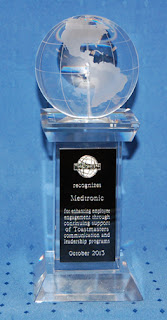 At a ceremony attended by more than 25 people, Linda Williams presented the Corporate Recognition Award to Medtronic. The beautiful crystal award was accepted by Bill Keighley, Manufacturing Director, who said “It’s heavier than it looks!” as he held it.

Others present were District Governor Dean Lampman, other Savvy Sayers members and their supervisors. I had an unexpected responsibility during Linda’s speech — she handed me her Special Occasion Speeches manual and asked me to evaluate her!

Back on the road, we stopped to pick up Marylee Mims, then headed to IBM in Coppell for the noon meeting of Talk Blue. We had a great visit with the members and took on some meeting roles, too.

Talk Blue member Marcheta Gardner is working on chartering a new community club and she was able to discuss her progress on this endeavor with us after the meeting.

The last club visit of the day was at NEC Corporation in Irving where club president Amy Newman had arranged a meeting with herself and officers Lidia Boisson, John Heiser and Stacey Street. We discussed several issues of concern to a young, fast-growing club. Amy also provided drinks and yummy cookies which definitely saved my life because apparently RAs and Lt. Governors don’t take time to eat lunch.

Our final stop was a nearby restaurant where we ordered an early dinner and reviewed our day. (I bravely took the opportunity to give Linda some verbal comments on her speech which she accepted graciously.) We were joined for a while by Dean Lampman, who had something to drink but no dinner. The server naturally thought Dean should get the check for the entire group; also naturally, this took Dean aback somewhat, but he coped well.

Back in the car, I delivered all my dignitaries to their destinations, and my day with the RA was over. For me, it was a most educational, exciting and enlightening experience. Also awfully alliterative, apparently.