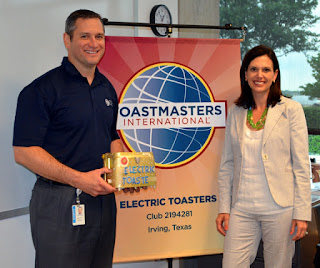 Taking the podium first was Gooch, who focused her speech on the importance of corporate involvement in community service, followed by Grasso with his speech “hacemos” (“we do”) in the context of leadership. He noted that leadership starts by taking the first step outside of the norm.

After their speeches were critiqued by Electric Toasters evaluators Kristi Navarro and Mechelle Davidson and voted on by attendees, the Golden Toaster ultimately went to Grasso by a very close margin. At the end of the day, the Electric Toasters’ Executive Speaker Showdown not only served as a means of bringing in visitors and variety to their club meetings, but it was also a display of executive support behind the cause of improving employees’ communication and leadership skills.