My Road to DTM

It Takes a Village to Becoming a Distinguished Toastmaster! 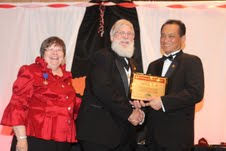 The “Greatest Show on Earth,” the District 25 Fall Conference, was held on November 16-17, 2012. I, and 13 other remarkable recipients, had the incredible honor of receiving our Distinguished Toastmaster medallion from John Lau, Toastmaster’s 2012-2013 International President, accompanied by our own District Governor, Distinguished Toastmaster, Bonne Stroman. It was an amazing experience that I will never forget!
Throughout all of the acceptance speeches by the recipients, there was a common thread. None of us accomplished this highest honor without the help of so many extraordinary Toastmasters friends and family members. I’d like to tell you about the three remarkable individuals that were instrumental in helping me achieve my Toastmasters Educational and Leadership goals.
When I attended my first Toastmasters meeting in October of 2009, I was very apprehensive and scared as many new members are. I was even a “chicken” to go by myself and “dragged” my wife, and now fellow Toastmaster, Terry along with me for support. She really didn’t like the idea but came along with me to humor me.
At the meeting, I made my first Toastmaster friend, Warren Ehn. Warren sat beside me during the meeting and explained what was going on. By the end of the meeting my head was spinning with all the acronyms that were being tossed around. Warren sat with me patiently after the meeting and “visually” drew out the Toastmasters’ Educational and Leadership tracks. This DTM (Distinguished Toastmaster) thing intrigued me, but seemed very unreachable especially for a new member. Warren continued to inspire me on my Toastmaster journey.
The next individual that was instrumental in my Toastmaster journey is our District Governor, Distinguished Toastmaster, Bonne Stroman. She taught me that there was a very exciting “Toastmasters world” outside the walls of the club. I started attending as many TLIs (Toastmasters Leadership Institute), Area and Division Contests and eventually District Conferences as I could. I was never the same after that. I was “on fire” and pumped with my involvement in Toastmasters. Bonne also taught me to embrace the principle of “servant leadership” and incorporate it in everything that I do in my leadership roles.
The final individual that had a profound effect on my journey to become a Distinguished Toastmaster was Maurice Taitt, Distinguished Toastmaster and Past District 25 Governor. Our paths crossed early in my Toastmasters career and I am blessed they did.
As with any new member, I stumbled along the way and got frustrated and said I CAN’T do this, I CAN’T fulfill all those speech and leadership projects. I just CAN’T! At one of my first District conferences, Maurice facilitated one of the educational sessions. I asked Maurice if we could sit down and talk a bit. I told him about my frustrations and wanting to give up at times. He listened intently without judgment. He then looked at me and sternly said “From this day forward, I want you to take the word CAN’T out of your vocabulary; it no longer exists, because you CAN do it. The only person stopping you is YOU!” Those “words of wisdom” had a profound effect on me. From that day forward Maurice and I stayed in touch and I kept him in the loop about my journey’s progress. 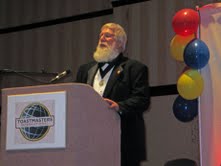 What’s the “take-away” that I’d like you to learn from my Toastmasters journey to Distinguished Toastmaster? I’d like to leave you with three, yes, three, “calls to action”. First, learn that you’re never alone in Toastmasters. Toastmasters is an incredible organization of warm supportive individuals. Everyone is there to cheer you on! Let them become your extended family; that’s what I’ve done. Second, get involved outside the club. Attend other club’s meetings to find out what they’re doing to be successful. Take the ideas back to your home club to make it a success as well. Finally, get yourself a mentor. Within the membership of District 25, there is a wealth of experience that is “yours for the taking”. All the experienced members are willing to share and help you. Take advantage of this and befriend the experienced Toastmasters, and let them inspire you and do the same for them.
It indeed takes a village to become a Distinguished Toastmaster! I challenge you to soar to new heights and strive to become a Distinguished Toastmaster as well!