October 31, 2012December 20, 2017
in District Events
On Sunday afternoon, October 21st, all D25 toastmasters were invited to a special screening of Speak- the Movie. Here are some comments that people wrote in about their reactions to this amazing movie.
I attended the showing at TCU on Sunday, Oct 21
As a new member to D25, I am learning about what amazing things Toastmasters offers its members. The list is long…very long. The movie “Speak” gives a great visual to what this organization can offer you. A place where one can dig deep within us to achieve greater things.  It’s a chance to make our mark on this world and a chance to inspire others to take the first step and speak.
Jessica Craig 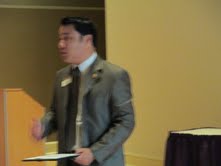 The District
25 Public Relations Officer, Gary Chiu, worked to make arrangements for a
screening of “Speak” at TCU on Sunday, October 21st.

A group of Toastmasters from around the
District and District 50 were present for the showing. We were also joined by Jim Key, 2003 World
Champion of Public Speaking and LaShunda Rundles’ sister, Sonya, for an
insightful question and answer session after the viewing.

The movie
was an eye-opening experience. It chronicled
the trials and tribulations of the 2008 World Champion finalists and really revealed
how difficult it is to become the World Champion of Public Speaking. The
build-up to the finals gave us some background on the players, which was
extremely helpful to understanding the battles they each faced. Also covered were the many facets of the
contest itself, including a portion of each speech. This ultimately lead to the extremely
emotional announcement of the winners, where the late LaShunda Rundles was
crowned World Champion of Public Speaking. She was the first woman to win in
more than two decades and the first ever African-American woman to win.  The movie continued with some post-contest highlights
showing what life was like for the winners and others after the contest. We
saw, for example, the significant struggles that LaShunda faced as she coped
with Lupus and other health problems.
Lupus is an autoimmune
disease in which the immune system becomes hyperactive and attacks normal,
healthy tissues. Sonya Rundles,
LaShunda’s sister, along with Jim Key, shared many insights about what life is
really like for a World Champion of Public Speaking, as well as the specific struggles
that LaShunda faced throughout her life as she coped with Lupus.
It was a
great opportunity to see this powerful, poignant movie about Toastmasters in
the company of my Toastmasters colleagues. It made me proud to rub elbows with people
that are keen to face one of mankind’s great fears – public speaking — and
work to improve themselves despite their personal challenges. This experience has strengthened my already
favorable view of the Toastmasters organization and the people who make it so
special.  Thank you to the District 25 members
for all that you do and to our great leaders for their efforts in coordinating
the presentation of “Speak”.