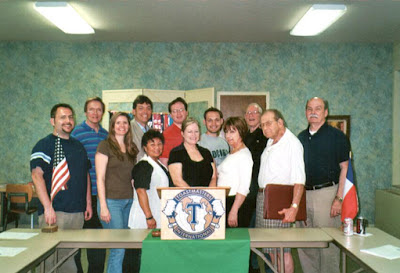 Thursday, March 29 was a special birthday night for Club 305. Chartered on April 1, 1945,  the club is now 67 years old. We had a birthday cake and a feast. There were also three speeches that focused on the speakers’ histories with Toastmasters.

Scotty has been a Toastmaster since 2006, and sought to explain [1] why he came, [2] how it has helped him, and [3] his future speechmaking opportunities. He is active in the State Restaurant Association, and will become the president this summer. Although this was his goal several years ago, he was plagued with “speech syndrome” when addressing a crowd. Through Toastmasters he has got his nervousness under control, learned to organize a speech, be more effective in his delivery, and has become a better listener. The Association has 23 chapters, and being president is still scary, but with the continued practice and support he gets from Toastmasters he is confident that he will be able to handle the position.

Nathan has been a Toastmaster since 2009. After Nathan graduated from Midwestern State University with a degree in information systems (and finally got a job in that field), he found the job interview process beyond the scope. He recounted one interview with a retail company which was devastating. That’s why he joined the club. He has focused on using his Toastmaster speech manuals in his presentations, in order to learn and become more comfortable in speaking before the group. He has not become an expert, yet, but is gratified by the improvements. He also has attended every District 25 conference in the last few years, and has left every conference with good feelings for the experience.

Larry has been a Toastmaster since 1956. He explained that a local dentist, Dr. Louis Tompkins, founded Club 305 in 1945 (being its first president), and help found District 25 in 1948 (being its first district governor), and the progression of D25 until its present state with 144 clubs, and only a fraction of the original district boundaries (which included the entire State of Texas and part of Louisiana).

Larry first heard of Toastmasters while a student at MSU in the late 1940s, and was a member of the “Junior Toastmasters Club,” which was sponsored by Club 305. He became a full Toastmaster after returning from the Army and beginning the practice of law. He says Toastmasters helped him be a better lawyer and person, because good communication is one of the top attributes that makes a person successful, not only in business, but in relationships with co-workers, friends and family. That is why he has stayed a Toastmaster for so long, and why he highly recommends it to others.

Be Our Guest – Workshop Recap